Judging by the news, you may think that Japanese Knotweed (Fallopia japonica) is staging an all out assault on England with the goal of total and complete occupation. And you’d be right. 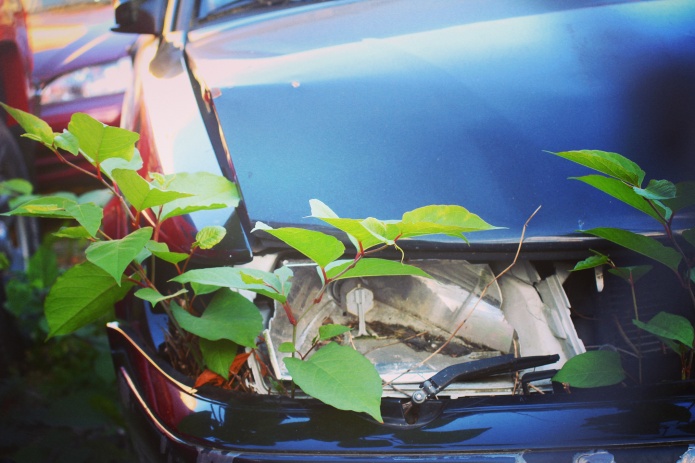 Japanese Knotweed takes a £166 million dollar bite out of the country’s budget every year. No wonder then that it’s described by the Environment Agency as “the UK’s most aggressive and destructive invasive plant.” It cost another whopping £70,000,000 to clear Japanese Knotweed from the London 2012 Summer Olympic sites. If trying to sell your house in Kensington Gardens, be sure to scour your property for this perennial  since even the smallest shoot is cause for banks to deny buyers a mortgage.  Have Japanese Knotweed on your property but don’t feel like hacking it back? That’ll cost you up to £2,500. Feel like planting Knotweed just for fun? You could go to prison for two years.

Why? Because Japanese Knotweed can self propagate from as little as third of an inch of rhizomal root – of which it often has miles. Meaning, if you try and rip it out by the root, you have effectively planted dozens more by scattering the rhizomes.  Rivalling kelp as the world’s fastest growing plant, Japanese Knotweed can grow up to 8 inches A DAY and reach 15 feet in height. It can destroy asphalt, crack concrete, topple fences, compromise building foundations, burst water pipes with its roots, and push the bricks out of cavity walls while growing inside. 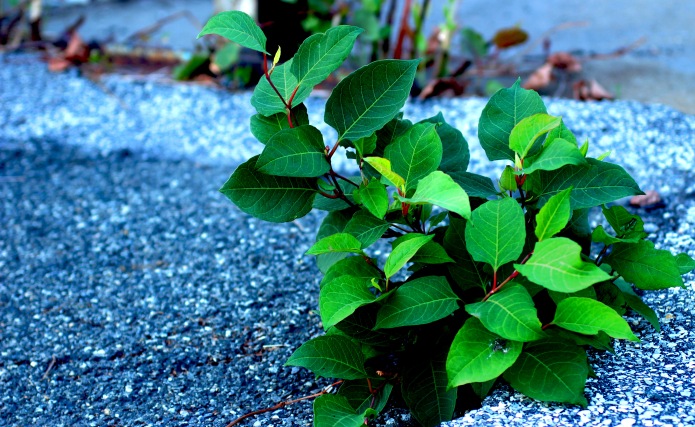 As you, astute reader, may have ascertained from its common name, Japanese Knotweed is not from England, but is native to Japan as well as parts of China and Korea. How Japanese Knotweed arrived in England is, given the country’s history, unsurprisingly a tale of economic and cultural colonialism as well as hubris. And, like most such stories of this nature, it came back to bite the perpetrator in the ass.

It all started with the appropriately named Philipp Franz Balthasar von Siebold, a Bavarian adventurer, botanist, and physician. In 1822 Siebold was employed by the Dutch East Indies Army (apparently private corporate armies are nothing new) as a surgeon. Posted to the idyllic sounding but in actuality 32-acre pile of rubble and debris, Deshima Island in Nagasaki Harbor, Siebold was nevertheless unruffled. In no time he cultivated a thriving herbal and medicinal garden that impressed Japanese officials so much that they granted him permission to move to the mainland explore farther afield. Siebold headed straight for Mount Unzen, an active group of overlapping volcanoes outside Nagasaki’s citycenter. It was here that he found Japanese Knotweed cascading down the craggy cliffs. 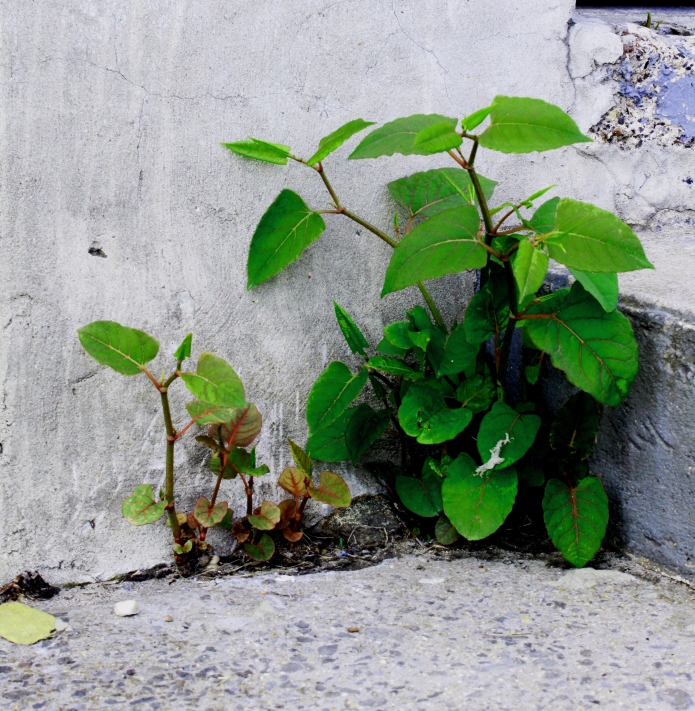 Plants were not all Siebold found in Japan however. He also found Kusumoto Taki with whom he fell in love and had a daughter, Kusumoto Ine, who was eventually to become Japan’s first female physician. In 1829, tragedy and misunderstanding rended this happy family however.  Caught in the possession of a map of Northern Japan, the government accused Siebold of being a Russian spy, placed him under house arrest, then expelled him from the country.

They let him keep his plants though and when he set sail, the deck of the vessel was a veritable nursery teeming with the samples he had collected, Japanese Knotweed included.

Soon after Siebald returned to Europe, the plant peeked the curiosity of the horticulturalists at Kew Gardens. But it more or less remained contained there for another 10 years until tastes English  in garden design shifted. 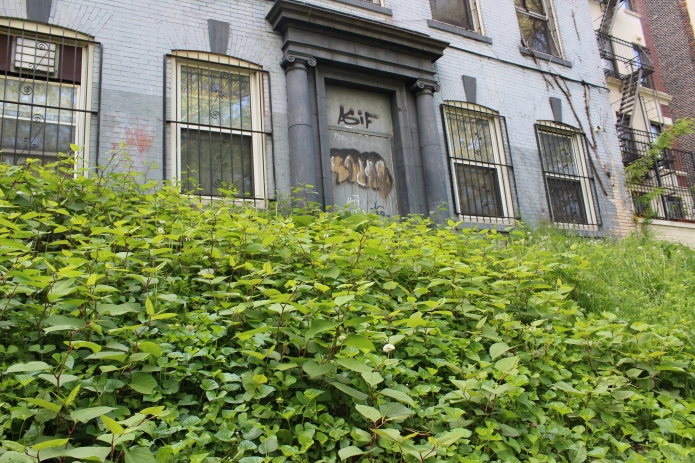 For decades the prime and proper, perfectly trimmed Victorian garden reigned supreme throughout the British Empire. But in 1870, wildchild landscape designer William Robinson started to change all that with a vision of a more “naturalistic” garden that allowed urban dwellers to experience a curated sense of the uncultivated. Its elegant ovate leaves, late blooming white flowers, and flexible shoots perfect for trellacing into romantic arches, not to mention its ability to grow like gangbusters, made Japanese Knotweed a must have perennial for any  au courant jardine.

Until they realized what was going on. But by then, as it often is, it was too late.

Why then, is Japan not overrun by Knotweed? Because Aphalara itadori, aka, Japanese knotweed psyllid, a type of plant lice, also native to Japan, loves the stuff and eats it by the mile. In 2010, the Wildlife Ministry set a handful of them loose in England. Though much ballyhooed, as it were, the little guys have yet to make much of an impact. My bet is they’ll have a taste for England’s beloved hydrangeas, also brought over from Japan by Siebold. 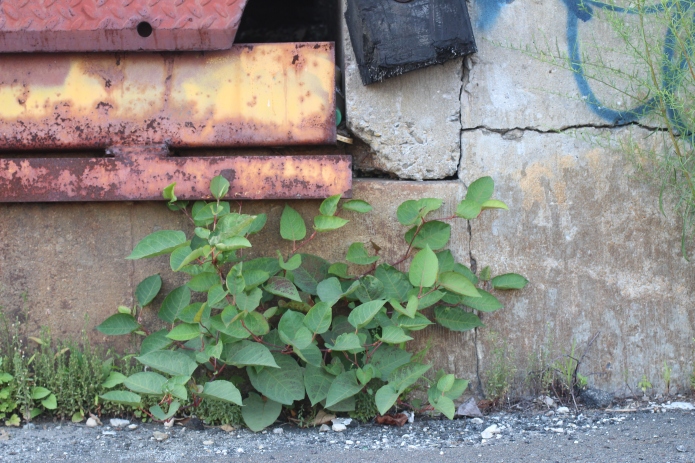 In addition to plant lice, it might also be of use for the lobsterbacks (meant with great affection) to import some of Asia’s traditional uses for Knotweed.

Eating the weeds is always a satisfying experience, and one that’s available in the case of Knotweed. In ancient Japan, Knotweed was considered a vital sansai (wild edible).  In modern times, if you’re able to avoid rat poison and commercial grade herbicides, you can make some tasty Knotweed in tomato sauce or Knotweed tarts. Feeling a bit skittish about foraging without an expert? You can take a class for that.

No one does plant-based medicine like the Chinese so it comes as no surprise that they’ve been incorporating Japanese Knotweed, which they call Hu Zhan or Tiger Cane, into their regimen for thousands of years. Based on the theory that it invigorates the breath, encourages blood circulation, and clears toxins Hu Zhan is used to treat cough, joint pain, chronic bronchitis, jaundice, amenorrhea, hypertension, and even cancer. 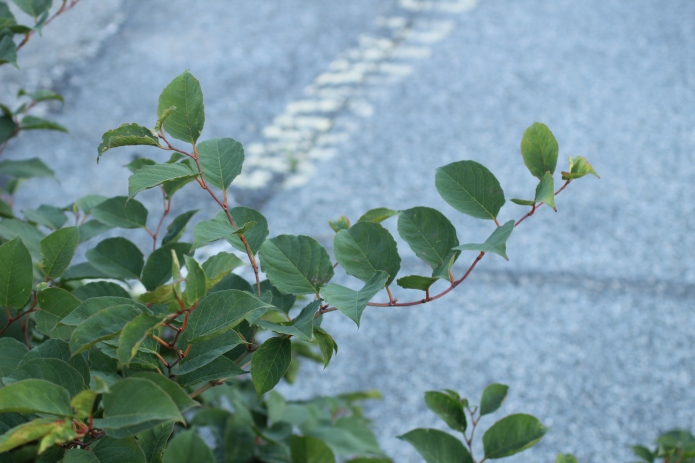 Even with its molecular mapping, pill popping, and chemical extracting obsessions, Western medicine has jumped on the Japanese Knotweed bandwagon of late, due to the large quantities of a chemical called resveratrol found in its rhizomes (and is also found in red wine, thank Dionysus). Recent studies indicate that resveratrol can contain and even kill cancer cells, prevents damage to blood vessels, reduce bad cholesterol levels, acts as an anti-inflammatory, benefit memory capacity, and may even reverse aging.

England? Perhaps you’ve got it all wrong about Japanese Knotweed. (Also, #Brexit)

In any case, from June to September you can find Japanese Knotweed tearing up the sidewalks of Coney Island, knocking down the constructions fences of Harlem, and bursting pipes in Industry City. 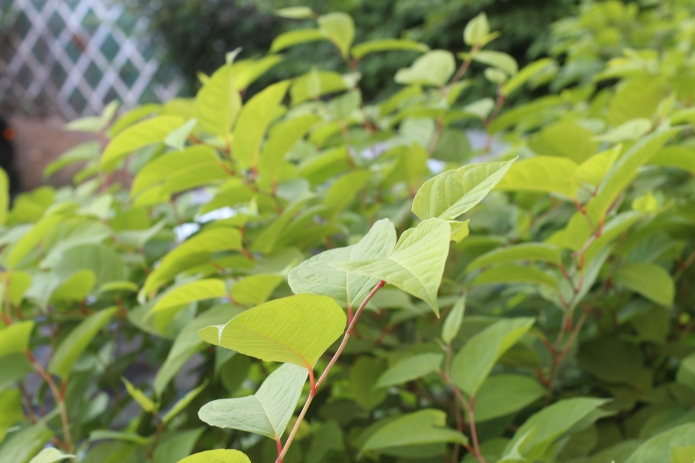