While most City Plants originate from elsewhere, American Pokeweed, Phytolacca americana, has the distinction of being from this particular neck of the woods. As such it was widely used by those who predated the colonists who by and large for better or worse brought the rest of Pokeweed’s weedy compatriots. 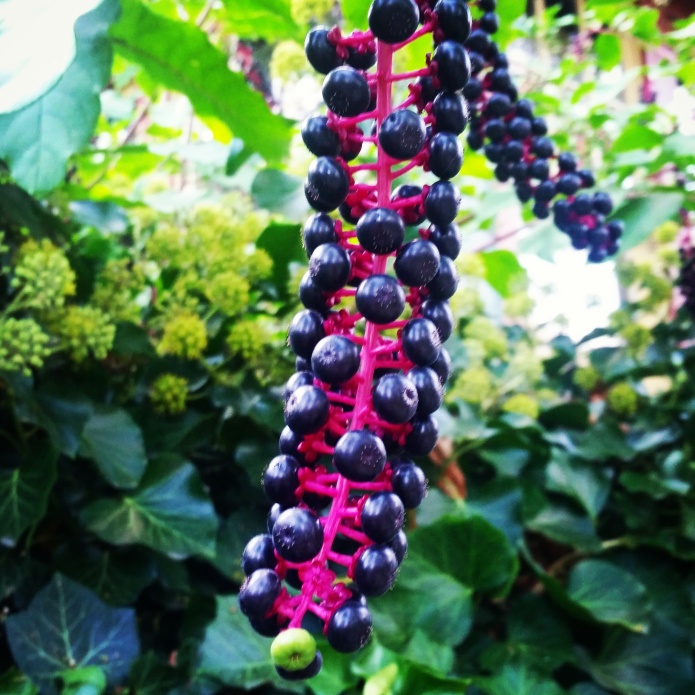 The Lenni Lenape living in Lenapehoking (currently known as Delaware) dried and roasted the roots of Pokeweed to internally treat treat throat infections and used its leaves for fungal infections and scabies.

The Cherokee peoples ate a Pokeweed berry a day to keep the arthritis away while the Pamunkey peoples boiled them into a tea to fight rheumatism.

The Mahuna used the roots to relieve headaches and migraines and the leaves to remove pimples and blackheads. The Iroquois used it as a cathartic, emetic, and expectorant.

Our name for the plant is derived from on the Algonquian word for it, pocan, which is based on their word for blood, pak referencing the bright red juice of the berry.

Speaking of blood, once the white settlers colonized the continent from sea to shining sea and started a massive war over it, the soldiers in said war, particularly those on the Southern side, used the juice of Pokeweed to pen letters home to beleaguered family members.

Beleaguered because food was short to say the least in the Civil War South. But no doubt, Pokeweed played a large part in making up for the dearth of cultivated crops that were either shipped to the front or scorched by invading forces. You see, while Pokeweed is poisonous if eaten raw or too old or really wrong in anyway (so don’t eat it!), it’s also true that people find a way of ingesting most anything if they’re hungry enough.

So the Southerners found that if you picked Pokeweed at no more than 6 inches high then boiled it twice, it was indeed edible, if not delicious. Thus Pokeweed (aka poke sallet, poke salad, and polk salad) was for a long time a staple of Southern cuisine.

Perhaps the most powerful proof of just how pervasive Pokeweed was in the Southern diet is the quintessential swamp rock ballad, Polk Salad Annie. Written by native Louisianian Tony Joe White and sung best by Elvis in all his jumpsuit glory, Polk Salad Annie is the story of a resourceful but poor Southern girl whose family were pretty much all criminals. Her mother was on a chain gang, her father was a layabout, her brothers were thieves, and her grandmother was eaten by alligators. Suffice it to say, she had little going for her. But what she did have was polk salad growing just about everywhere which she picked the proverbial “mess” of every evening to keep from going hungry.

We’re not sure how it turned out for Annie in the end. The ribaldry of Elvis’ undulating hips would suggest she moved to New Orleans and made it as a…. showgirl. But given that a Pokeweed was for many generations a Southern delicacy, I prefer to think she made it as a chef.

According to Bayou Bob, Pokeweed is better fried than green tomatoes, which is saying a lot. Meanwhile, the Southern Angle suggests cooking polk salad in a caste iron skillet with hot pepper sauce and serving it with a heap of pinto beans. Josie Ray suggests them with bacon and cheese. Then again, who wouldn’t?

As foraging for food became less necessary with the advent of industrialized agriculture and the supermarket, fewer and fewer ventured into the woods to find pokeweed. But the taste for it didn’t wane and for about a decade the Allen Canning Company of Siloam Springs, Arkansas offered poke salet in a can. The discontinuance of this product  wasn’t due to a lack of demand, but rather a scarcity of supply since the company couldn’t find enough people willing to forage for production.

Should you wish to forage for yourself (but don’t eat it), you can find Pokeweed growing beneath elevated train tracks in Harlem, creeping up construction fences of Long Island City, or spreading out in the vacant lots of Staten Island.